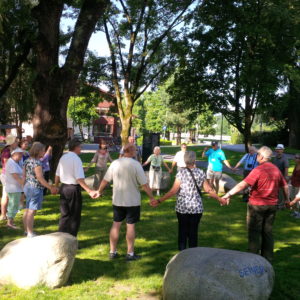 Thursday morning we drove to visit the new monument remembering Jacob Hutter and other Anabaptists who were martyred in this region of Tyrol in the 16th century. The monument, dedicated last October in a park along the fast-flowing Inn River, was placed in partnership with the city of Innsbruck, the Catholic and Lutheran churches and the Hutterite working committee. It is a simple monument of 12 stones placed with a sign remembering this dark chapter of injustice in Hutterite history in hope that by remembering it may lead to greater understanding and respect between Christian denominations and communities in Tyrol. The plaque uses the scripture from Zechariah 9:16, “The Lord their God will save his people on that day as a shepherd saves his flock.” (Photo – group gathering for worship at rocks)

In Rattenberg we noticed that a plaque has been placed on a house stating that Pilgrim Marpeck was born in this house in 1495. Marpeck, an Anabaptist, was an engineer who not only worked in Rattenberg but also in Strasbourg and Augsburg. Because of his badly-needed skills as an engineer developing the cities’ waterworks in Strasbourg and Augsburg, some believe this was the reason he lived to be an elderly man even though an active Anabaptist.

In Rattenberg we enjoyed watching the glass blowers quickly make swans with the hot glass. What an art! We were glad that we had adequate time to shop since they have so many beautiful items made of lead crystal. Many of us hiked up to the castle overlooking the Inn River. 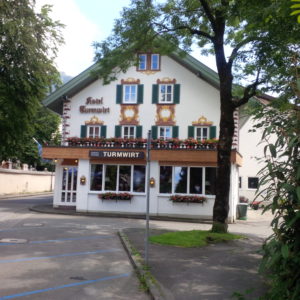 We arrived in Oberammergau early afternoon and were welcomed by Georg, Eta and Carola Glas, the owners of  beautiful Hotel Turmwirt. Wilmer said this is home away from home for him! We needed to say goodbye to JP our driver. His driving hours are completed. Markus Becker will drive our last 2 days.

It was such a beautiful day to visit the shops, explore the passion play theatre and museum. Following dinner John Ruth gave his quiz which included 20 questions and took us through our tour. Hannah Kenagy got the first place prize. Not surprising to the group Anja her sister came in 2nd. Congratulations! 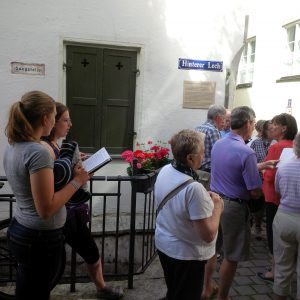 This morning our first stop was in Augsburg to visit the house where in 1528  on Easter morning, 88 Anabaptist were arrested during worship. We sang ,”Heart with loving heart united.” John Ruth told us that the minister informed the congregation that the police were coming. “You are free to go home if you don’t think you will be able to remain steadfast.” Apparently around 12-15 persons went home. The 88 persons who remained were arrested just before they were served communion. 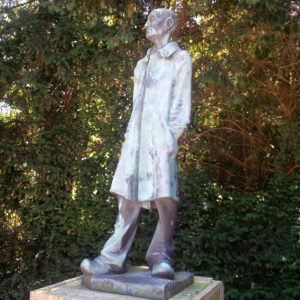 Wilmer reminded the group that this suffering continues today. The UN recently reported that there are 43 million displaced citizens in the world today. They have been forced to flee their homes as refugees. 27 million are primarily due to civil war which is often driven by religious belief;  the other 15 million due to natural disasters.

We arrived in Wasserburg on the Inn River. We said goodbye to Hannah and Anja Kenagy before dinner as they need to catch the 6:10 p.m. train to their cousin’s wedding which takes place tomorrow.

The farewell dinner was a delicious Bavarian Dinner which included pancake soup. John Ruth tried the alternative summer soup. He said to the waitress, “This is good for those who like it, but the next time I will take the pancake soup.”  Many photos were taken and we concluded with the hymn, “God be with you till we meet again.”

Tomorrow morning we will say goodbye before we fly from Munich International Airport to meet our families in North America.

6 Tips for your Next Vacation Close to Home