Zurich is an important city for Anabaptist history, as this is where it all began! We started our day today with a walking tour of the centre of town to see various sites related to Anabaptist history, including the place where the first baptisms took place. 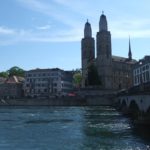 As we drove further into Switzerland, we had intended to cross the Alps through the Sustenpass in order to have the best possible views of the spectacular mountains on our drive. But unfortunately, we discovered that the pass was closed due to snow conditions and so we had to go another route. We still had many beautiful sights to see out of the bus windows though, and I heard many cameras snapping as we all gawked at the incredible beauty of the mountain scenery.

Then when we reached Erlenbach, we had the opportunity for even better views of the Alps–because we got to take a cable car up to the top of the Stockhorn! This had been scheduled for tomorrow, but given tomorrow’s forecast of rain we decided to fit it in today instead to take advantage of the beautiful weather today.

Halfway up the cable car

The cable car to the top goes in two runs, so halfway up you exit the cable car and wait for a few minutes before transferring to a different car that takes you to the top. I, excited to start exploring the Alpine landscape, eagerly started out on a hike from the midpoint landing without realizing I was supposed to continue up. John realized my mistake and called after me, and I discovered, in jogging uphill to get back to the cable car station, that exercising at a high elevation is hard work! My lungs were burning for an embarrassing amount of time for such a brief jog.

But I did successfully catch the next cable car up, and although the midpoint was astonishingly beautiful I’m glad I didn’t miss the opportunity to reach the top of the mountain because it was absolutely incredible.

My fellow travelers at this point know me well enough that nobody was surprised to see me immediately head for the trail pointing up, once I was at the top of the cable car’s route. I delightedly climbed up the trail to reach the very peak of the mountain. What an amazing experience! 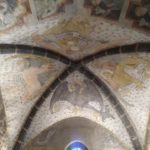 We all made it safely back down the mountain again – nobody missed the last cable car down, tempting though it might have been to squeeze in some extra time on the mountain. All the trails traversing other parts of the mountain looked so tempting to me, though completely impractical in the circumstances. Ah well!

Next, we popped over to the nearby Reformed Church where Jacob Amman, the founder of the Amish movement, had been born. The church is a thousand years old and has incredible frescoes painted on the walls, dating back to before it was Reformed. The frescoes were only discovered relatively recently, having been whitewashed over by the Reformers who thought it inappropriate to have such decoration in a church, and are still in the process of being restored.

Now we’re in Bern for the night and have the luxury of staying in one place for multiple nights in a row. I’m looking forward to not having to pack up in the morning!