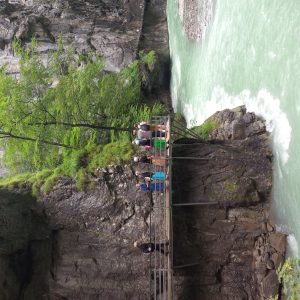 Saturday morning in Erlenbach we visited the parish church where Jacob Amman would have been baptized as a child. The walls of the Swiss Reformed Church today are covered with frescos which date back to the Middle Ages. John Ruth said when Amman was baptized they were covered with plaster. They have only been uncovered in the last century.

Walking the Aareschlucht was so refreshing after our time with the families in Würzbrunnen and reviewing our history. The roar of the water was very inspiring as we walked in silence contemplating how over the centuries the water has cut through the gorge. 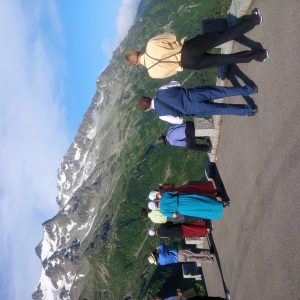 On Sunday we left Meiringen and traveled over the Sustenpass. The scenery was spectacular with sunshine on the fresh snow on the Alps. Most of them were free of clouds. At the top John Ruth enjoyed his annual cup of Ovaltine. We enjoyed a playful snowball fight, climbing the Alps and running along the mountain lake.

Everyone agreed the highlight of the tour was our time of worship in the Anabaptist Cave. We followed the Amish tradition of allowing the scriptures to speak for themselves. The Amish sang the Lobsang (Loblied). The three preachers read the Sermon on the Mount, Matthew 5, 6 & 7 without comment. We felt this was a gift to worship where they met in secret in order to have the freedom of conscience. 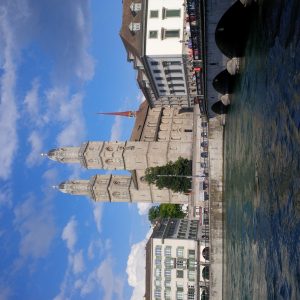 The Grossmünster in Zurich

Sunday afternoon was a good time to do our Anabaptist historical walking tour in Zurich. Everyone was pleased to hear John Ruth share the story. His knowledge is exceptional and makes us want to read his book, Conrad Grebel, Son of Zurich. 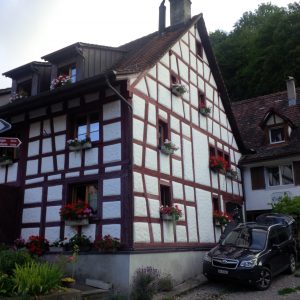 Half-timbered house in the Hemmental

Monday morning we traveled to Hemmental to meet our friend Wilfred Leu. He is the farmer in charge of the forest where the Schleitheim marker has been placed. We all traveled on his wagon for the first section through the forest and observed the health of the forest. The air was so fresh. At the first area where we could walk to the marker, 18 persons decided to walk and do the steep climb through the trees.  At the second stop which was the shorter climb another 4 persons decided to do the climb with the help of a walking stick up the remainder of the road. During our time of worship John Ruth said those who climbed also had the pilgrimage of the climb, not only the historical memory. 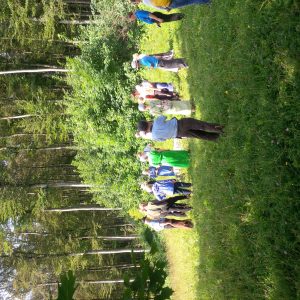 Worship at the Schleitheim marker

At Neuhausen we marveled at the volume of water going over the Rhine Falls. Sam Stoltzfus said he didn’t know about the beauty of these falls. Many persons hiked along the falls and also fed the fish from the bridge.

On our drive to Feldkirch, Austria, we stopped first at Appenzell to enjoy the painted houses which is a trademark of this region of Switzerland. At St. Gallen we stood by the statue of Conrad Grebel’s brother-in-law Vadian. He was the local doctor and the most famous scholar of Switzerland of his day. He was very fond of Conrad but was disappointed when he joined the Anabaptist movement.

On Tuesday we traveled the beautiful Silvretta Pass. John suggested we have a vote as to which pass is more spectacular, the Sustenpass of Switzerland or Silvretta of Austria. The highlight at the top was walking beside the cows. They are grazed up the mountain in the summer and down in the towns in the winter. Their milk is used for the Alpine cheese which was for sale along the drive.

In Innsbruck we first stopped at the new marker remembering the persecution, suffering and the martyrdom of the Hutterites in Tyrol. There are 12 rocks placed in a circle. The rocks are not uniform but are each unique. They signify the uniqueness of the 12 persons listed on the plaque who died for their faith.

We stood before Maximillian’s Palace and looked up at the balcony with the gold roof. From this position he could view the functions happening in the square. It was in this square that Jacob Hutter, leader of the Hutterites, was put to death. 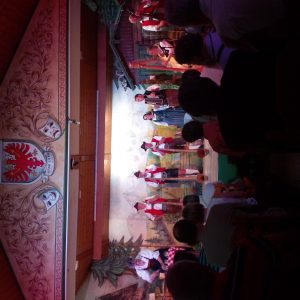 We had front row seats at the Gundolf Family Tyrolean Folk Show in Innsbruck. The founder drove one of the transfer vehicles. He told us that he and his brother started the show more than 40 years ago. He has learned to play 10 instruments — “This way I don’t need to dance.” We were all impressed with the music he could get out of the saw. Sam talked to him afterwards and looked at the saw. It was a regular hand saw. He told us the higher tones come from bending the saw.

Yesterday morning we toured Rattenberg, the birthplace of Pilgram Marpeck. We observed the plaque on the house where he was born. An Anabaptist leader who was a mining engineer, he was forced to leave the city. He worked and provided leadership in Strasbourg and later Augsburg. We were fascinated by the lead crystal and the glassblowers in Rattenberg.

Dachau Concentration Camp was a very sobering visit. We were impressed by the busloads of young people touring the camp on a Wednesday afternoon. Some of our Amish teachers bought materials that they can use in their classrooms in Indiana. 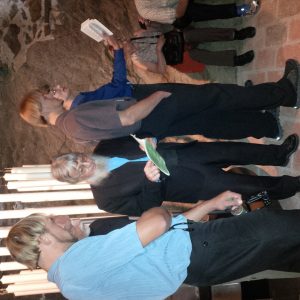 Singing in the dungeon at Passau

Today’s highlight was visiting the Oberhaus Castle at Passau. It was in this castle that Anabaptists were held in the dungeon from 1535 to 1540. We do not know the names of the persons; however, John Ruth said we know there were men and women as well as children. We do not know the number held but believe there were dozens of them.

Our time in the dungeon was very meaningful as the Amish still sing in their worship hymns written in Passau. 51 songs were kept and printed in the 1564 Ausbund edition. Our worship included several hymns written during this era. They portrayed suffering, persecution and joy. “Where can I go? Where is my refuge? My refuge is only in God.” John commented that Amish worship is not driven by schedule. It becomes a real blessing to participate.