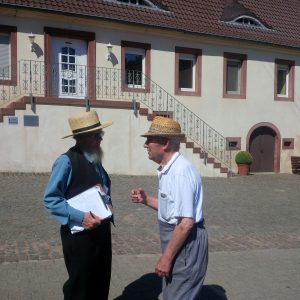 Sam Stoltzfus talking with Peter Showalter at the Ringweilerhof of Nicholas Stoltzfus.

Tuesday was a special day for Sam Stoltzfus as we visited the Ringweilerhof near Zweibrucken. It was at this farm that Nicholas Stoltzfus worked before he immigrated to America. The farmers were very busy as they were harvesting wheat. However, they gave us a warm welcome and were expecting us since we had called ahead. They also produce honey so many souvenir jars were bought. The Ringweilerhof looks very prosperous and well maintained. Sam said he could see Stoltzfus’s at home here.

We enjoyed visiting the cathedral in Speyer located along the Rhine. Due to heavy traffic we were unable to visit the Köln Cathedral earlier as planned; this made this visit even more significant.

The Reformers’ Monument in Worms has Luther in the center behind the nobles with their swords. John Ruth reminded us that Luther holding the scriptures was protected by the sword. Otherwise, like the four earlier reformers depicted on the monument, he too would have been martyred.

Wednesday was our day to visit the east side of the Rhine River, the Kraichgau. Our first stop was Steinsfurt. We were welcomed by Theophil Kirsch who had the key for the cellar. We recognized many familiar names of persons who were arrested as they were singing and worshiping in this Anabaptist widow’s cellar. We sang “Heart with Loving heart United” without fear of being arrested. 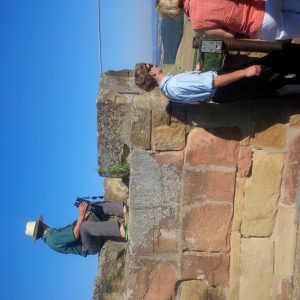 Climbing the Steinsberg tower was a highlight. This tower is called the compass of the Kraichgau. From the tower one can view all the surrounding villages. Wilmer pointed out Bockschaft where the Martin family lived and worked during their time in the Kraichgau.

The drive through the Black Forest was spectacular. At the Herr House of Clocks we not only enjoyed shopping and buying souvenirs, we were pleased that each of us were entitled to a piece of Black Forest cake and a cup of coffee.

Thursday morning we entered France and the Alsace. We are now in the heart of the Amish story. Our first stop was to visit the Oak Tree at Salm which is more than 230 years old. The Amish/Mennonites planted this tree as thanks to God. Church leaders returned from Paris reporting being granted exemption from military service. Fred Lichti noted Bishop Joseph Ruby, the first bishop of the East Zorra Amish-Mennonite Church in Ontario, was born here in 1813. He was ordained bishop in Canada in 1859. We held hands around the tree and the Amish sang “Sweet Hour of Prayer”.

In Ste. Marie-aux-Mines John Ruth reminded us that this is where Jacob Amman lived with his family. We allowed free time to explore, talk to the locals. Jennifer Sears was invited to ring the bell at St. Matthews, a 17th century church, at noon. 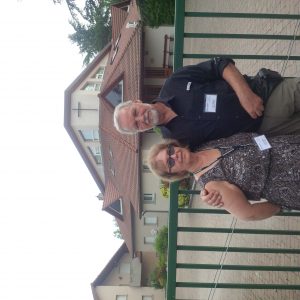 After leaving Riquewihr we visited the Colmar/Ingersheim Mennonite Church. Wilmer shared that the French Mennonites built this church building with a large percentage of the cost being paid for by donations from TourMagination when they hosted our groups in their homes. Larry Bardell told us his family is from here. 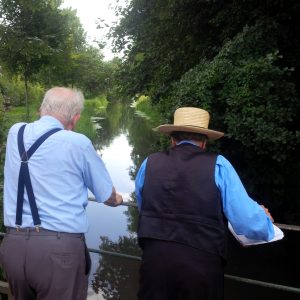 John Ruth and Sam Stoltzfus looking at the creek in Ohenheim.

Our last stop in the Alsace was a new discovery for TourMagination, Ohenheim. We stopped at the site of an old mill along the creek. In the spring of 1694, Jacob Amman summoned a meeting to take place at this mill. It was here where the separation occurred. It was not over theology but rather how we do Church. They finally said, we can’t agree. We have to separate. They didn’t want to be together any more.

Friday was our day for Bern and the Emmental. In Bern we ended our historic walking tour by the Aare River where four boatloads of Anabaptists were placed as prisoners of conscience. John Ruth reminded us that William Penn welcomed these prisoners to his new settlement in Pennsylvania. However, the persons who agreed to work with the Swiss authorities and Penn turned out to be a failure since the prisoners were released by the Dutch when their boats arrived on Dutch territory. The Dutch said no prisoners of conscience are allowed to travel on the Rhine through our territory. 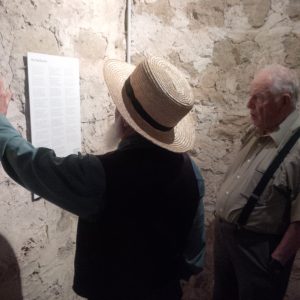 At the Trachselwald Castle we climbed the tower where Hans, the last Anabaptist martyr of the Emmental, was held.

The highlight of our visit in the Emmental was being hosted by Swiss Reformed families for the night. They welcomed us at the Würzbrunnen Chapel. (Photo- Wurzbrunnen Chapel under the rainbow). During our worship and sharing we were told it was in this very chapel that the decision was made that your ancestors were no longer welcome here. Today we welcome you to our homes. 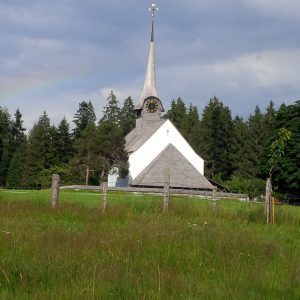 Can you see the rainbow over Wurzbrunnen Chapel?

The minister used Genesis12:1-4 where he talked about God’s protection on our journey and now you have come back. The Amish sang the hymn “There are Two Roads.” When Fred Lichti reported today that their experience was an 11 out of a 10, Loren Beachy said they had a 12! When Pastor Hans said goodbye to us this morning he thanked us and wished us God’s blessing and said, please come again.

Se Yim noticed the rainbow over the Chapel when we left. He said, Wilmer, do you see God’s message to us as we leave?