Remembering What Sparked the Protestant Reformation

Remembering What Sparked the Protestant Reformation 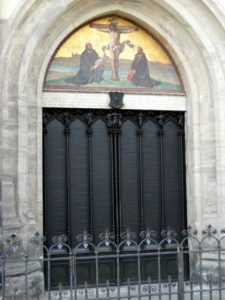 On October 31, 1517, Martin Luther posted a list of 95 theses for debate on the topic of indulgences on the side door to the Church of All Saints (the “Castle Church”) in Wittenberg, the capital city of the Electorate of Saxony. The door served as the bulletin board for the University of Wittenberg, since that was the door by which the students entered for their daily chapel service.

The church was also the repository for the Elector of Saxony Frederick’s collection of relics, the largest such collection in Germany. Every year on All Saints Day, November 1, the church was opened to the general public and anyone who paid the admission fee and viewed the relics was promised many hundreds of thousands of years off of their time in purgatory.

In 1517, Elector Frederick may well have been worried that people would not attend his event. Not long before, Albert von Brandenburg, newly installed Archbishop of Mainz, and Pope Leo X had declared an indulgence. Anyone who purchased an indulgence for the price of twenty marks was promised total release for the penalties for their sins and thus no time at all in purgatory. Stiff competition indeed!

Luther was inviting the academic community to a debate on the effectiveness of indulgences of any kind—including those gained by viewing relics. The theses were in Latin, as Latin was the language of academia, so most of the people entering the church the next day would not really have noticed. None the less, those provocative theses were spread across Germany, translated into German and sparked the movement known as the Protestant Reformation.

When you go to Wittenberg today the original Castle Church is no longer there. Like all late-Medieval towns, Wittenberg has seen its share of wars and fires and the Castle Church has burned down more than once. The current church was built by the Kaiser of the newly unified Germany to commemorate the anniversary of Luther’s birth. It is a shrine to the memory of the Reformation and includes the actual tombs of Luther and his closest colleague, Philip Melanchthon. It also still includes the carved wooden seats built for the Kaiser and the descendants of the German dukes who supported the Reformation in the 1530s, looking for all the world like Medieval choir stalls.

Luther’s 95 Theses are immortalized in bronze on the side doors, near where they were originally posted. The church is a vivid reminder of how far we have come along the road to Christian unity.

Professor Robert (Bob) Kelly is co-leading a Reformation tour called Celebrating 500 Years of the Reformation & Life of Luther, May 12 to May 21, 2017.