Queensland and The Great Barrier Reef

Queensland and The Great Barrier Reef 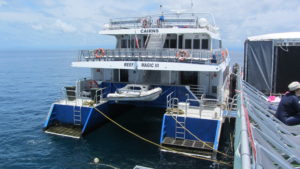 Saturday morning began with a short walk from our hotel to the wharf where we were welcomed on-board a Reef Magic Catamaran Cruiser and once we completed the safety briefing and departed the wharf it took about 1 ½ hours of leisurely sailing north to reach a massive pontoon platform that would serve as our outpost within the Great Barrier Reef.

It was a bit of an organized chaos when we arrived with more than four languages to communicate instructions to the 100 plus guests from all over the world but the experienced and enthusiastic crew made it all work and in no time people were suited up for snorkeling, touring in glass bottom boats and even helicopter rides. Most of our group donned snorkel gear, flippers and full length lycra suits to protect us from stinging jelly fish that were apparently plentiful in this part of ocean (we never saw one jelly fish but better safe than sorry).

It was then time to enter the clear warm waters of North Australia to explore this world famous coral reef including the thousands of creatures that exist here. After the first time out we returned to compare notes and get tips from the more experienced snorkel divers in our group, and then we returned again and again to make the best of this unique opportunity. It was fortunate that the mostly cloudy conditions kept things reasonably comfortable despite a high humidity and there was always the air conditioned Cruiser to return to for a bit of reprieve if needed. 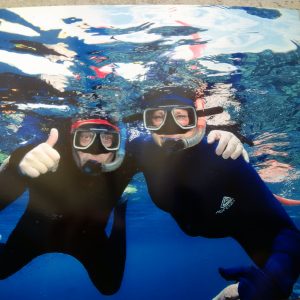 Snorkeling at the Great Barrier Reef

There were a number of marine biologists on-board who offered interesting information about the current state of the Great Barrier Reef and their opinion on what it will take to prevent more damage to this sensitive ecosystem. To add to the special treatment the crew presented us to an expansive buffet lunch and two snack breaks throughout the day. As we headed back to shore in the late afternoon some of us located photos that an underwater photographer had taken while out snorkeling. Back on land we got freshened up and headed out to explore the town of Cairns and grab a bite to conclude this fun and interesting day in Australia.

Sunday  was a free day and the majority of the group headed out early to explore the rainforest on the Kuranda Scenic Railway which offered a number of stops to view sites like the Behana Gorge Waterfall and then spend some time in the village of Kuranda within the Tjapukai Aboriginal Cultural Park. This destination offered some opportunities to purchase local crafts for souvenirs and to learn more about the Indigenous peoples that occupied this part of the Australian continent.

The return to Cairns offered a different and fascinating view of the rainforest from high above on the Sky Train cable car. Many photos were taken to try and capture the impressive beauty of this tropical rain forest but the individual memories will paint pictures that we will share with friends and family for months to come.

It was also nice to have time to relax by the swimming pool, do a bit of shopping (also coined “retail therapy”) and enjoy more seafood from the many restaurants in town. A fascinating discovery was the significant population of fruit bats that have made their home in Cairns. At twilight these thousands of large flying mammals perform a daily ritual of gathering in the sky above town and then swoop down the narrow street of the Esplanade along the ocean shoreline leaving the throngs of tourists and locals shrieking with a mix of fear and excitement. The small community of Cairns, Queensland has proven to be an interesting and fun stop along our tour through Australia. 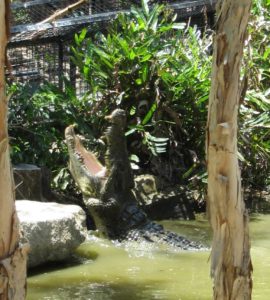 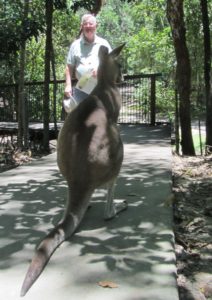 Stan and Alan the Kangaroo getting acquainted

On Monday our guide in Cairns, Suzanne, met us in the lobby and we loaded our bags on the bus and headed out to Hartley’s Crocodile Adventure Park which began with a lively crocodile feeding demonstration. It was another hot and humid day but we did our best to stay in the shade as we ventured off in all directions throughout the park to get a close up of sleepy koalas, grey kangaroos, large cassowaries, numerous colourful parrots and more. We concluded our time in the park with a boat ride and close encounters with crocodiles in the expansive lagoon.

We arrived at the Cairns airport in plenty of time to catch our flight to Sydney. Following a few brief delays we arrived in the cosmopolitan city of Sydney and our guide Deb met us at the baggage area. She impressed us with her homework as she had all of our names memorized and she ensured we got to the Four Seasons Hotel quickly as everyone was ready to get cleaned up and get some sleep.