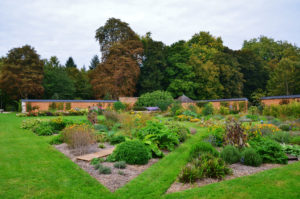 An example of an ornamental fruit and vegetable garden, known as a potager. Photo credit: Isamiga76

I’ve fallen in love with vegetables, or more specifically, vegetable gardening. I have loved vegetables for a long time already.

On a trip to South Africa in 2014, my husband John and I visited an amazing farm garden at Babylonstoren. The garden consisted of large vegetable, fruit and herb plots that were laid out very attractively. This was really the first example of large scale, edible gardening design I had seen.

Shortly after, I got caught up in a BBC TV series on French gardens. The series looked at historical gardens like Versailles and Vaux-le-Vicomte, the kitchen garden of a Michelin chef, plus grand potagers like Villandry and La Prieuré D’Orsan.

I’ve been an avid gardener and landscape designer for many years with the great fortune of picking out anything I wanted from our 25-acre perennial nursery in Abbotsford, BC, certainly not something many people have access to. I’ve played with all the trending plants and design ideas. But after more than 25 years of expanding the gardens around our home, I became a bit tired of just redoing the same space over and over again. 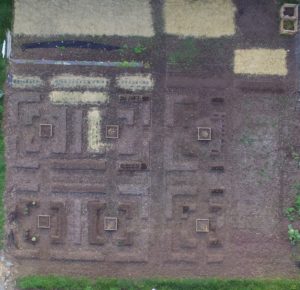 I decided that I wanted to completely remake my small vegetable garden into an ornamental “grand” potager. I was thrilled at the prospect of designing something entirely new. For weeks over the winter, I played with layouts and pored over seed catalogues. I placed orders for everything from our regular staples to exotic and heirloom vegetables I’d never heard of.

In early spring, the hard work of laying out the design began. I ran twine to mark out the grid from which I would dig the beds. Potagers tend to be laid out in geometric grids; so I developed six rectangular spaces, each broken down into smaller rows and square plots.

For this first year, I’ve simply left the beds mounded and I covered the pathways with landscape fabric topped with about 2” of coarse bark. The only structures I put in were two walls of metal gridding as a support for my tomatoes and espalier fruit trees plus a simple tubing pergola to anchor the centre of the garden. Other structures may well be added in the future. One thing I’ve learned is that a garden is never done.

Here are a few tips to set up your own potager:

1.  Find a space that gets at least 6 hrs of sun per day during the summer. Ideally, this space should be symmetrical—either square, rectangular or even round. You can begin with something as small as 10’ x 10’ or go for the grand plan right from the start.

2.  Divide the space up equally. Squares and circles are easy to divide into four quadrants. Rectangular space can be divided up many ways, but try to keep each division the same size and shape as the others. There are lots of pictures online to help you with creative ways of dividing up you space.

3.  Mark pathways between each quadrant. Main pathways should be at least 30” and preferably 3’ wide to allow access for wheelbarrows and other equipment. If your space in larger and you have room to divide your larger quadrants, these paths only need to be 24” wide. Be sure to keep the width of the growing bed under 4’ so that you can reach to the centre without stepping on the soil.

4.  Ensure you have good quality loam by adding compost and turning it into the soil. Lay a porous ground barrier (landscape fabric or even newspapers) on the pathway and cover with 2-3” of course bark.

Together with her husband John, Kelly Schroeder owns Valleybrook Gardens / Heritage Perennials—a well-known national nursery company headquartered in Abbotsford, British Columbia. While John manages the business, Kelly is a landscape designer and avid gardener. Their work together has been featured in newspapers and magazines and won multiple awards. John and Kelly will be leading a 9-day France Gardens & Gastronomy Tour, September 14-22, 2017.