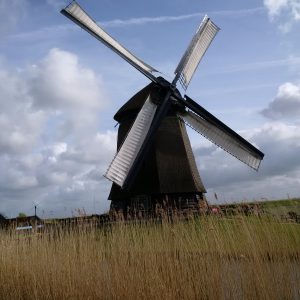 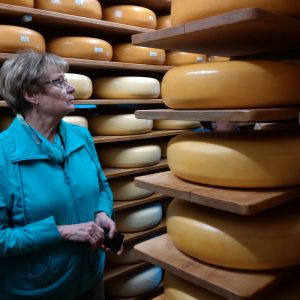 We are on a tour of discovery of Dutch culture, tulips and hyacinths, and Menno Simons. Our first engagement was with the very warm and hospitable Pieter and Martha Postma. They invited us for tea to their traditional Dutch home in the city of Gouda after which we enjoyed a tour and lunch at a family operated cheese farm. The Postmas are quite involved in their city, especially in the music community. The group listened intently to their explanations of the various stained glass windows we saw in the Church of St. John which is the large Gothic church centrally located in Gouda.

Travelling north we explored the peaceful village of Giethoorn, the village with no roads, where we traversed in the Whisperboats along the 6-7 km of canals enjoying the simple beauty of the village. We even motored past a former Doopsgezinde (Mennonite) Church located in the village. 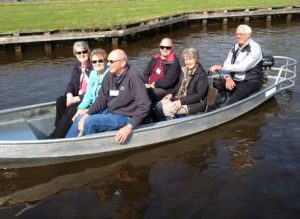 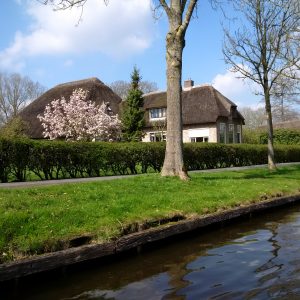 We continued north and soon we again felt the warm hospitality of the Frisian families who hosted us in their homes in Berlikum where they have hosted TourMagination groups for many years. Onijdes Sijtsma greeted us in the church with coffee, tea and biscuits and presented some of his book collection which included a variety of Martyr’s Mirrors.

The next day Antoinette and Anna guided us around the countryside to many significant Anabaptist sites including the hidden church in Pingjum, the Menno Simons monument, the church where Menno Simons was a monk in Witmarsum, as well as Grootschermer, Noordeiner and Graft – all villages close in proximity where Mennonites have lived and worked since the mid-17th century, all of which were led by Menno Simons’ leadership during the Anabaptist movement.

And as we drove we caught glimpses interspersed in the landscape of the glorious fields of tulips and hyacinths all in array in various shades of purple, pink and yellow. The day ended in the quaint Dutch  fishing village of Volendam, the group’s last night on land before embarking on the AmaPrima which will sail along the Rhine River for the next week.