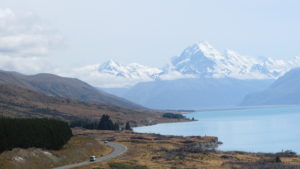 We had arrived to Mount Cook late on Wednesday but caught a glimpse of the impressive Alps of New Zealand (NZ) amongst the broken clouds. Following a delicious buffet dinner at the Hermitage Hotel we were looking forward to do some star gazing but the sky became completely overcast so we all called it an evening. The next morning we had a relaxed departure which offered enough time for a sightseeing walk toward a glacier and take in some short movies in the Planetarium/Sir Edmund Hillary Museum. Don Phillips and Stan Clemens from our group were not disappointed with their sky plane tour and glacier landing as the weather turned out to be perfect. 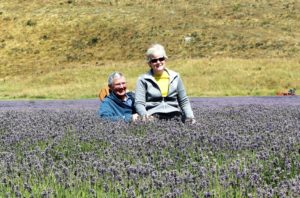 Joe and Barb Zimmerman in the lavender

Our departure from this breath-taking mountain scenery felt premature but our schedule to be in Queenstown by dark required us to be back on the bus. But we were treated to exquisite sites along the glacier-fed Tasman River and Lake Pukaki that will be locked into our memories. As we made our way to Queenstown, our driver Ethan surprised us with a brief stop at a lavender farm to take a few photos and enjoy treats of lavender-flavoured ice cream and chocolate.

As we drove along the rolling and winding highway, Ethan shared more of his seemingly endless wealth of knowledge about NZ sheep and dairy farming along with answers to the many questions we threw at him. Once we settled into the impressive Hotel St. Moritz in Queenstown we ventured in small groups to catch a late dinner in the very active central district on the shores of Lake Wakatipu before calling it a night. 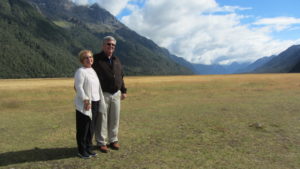 On Friday morning we were up bright and early in order to be off on our journey to Milford Sound. The ride was broken up with a number of memorable stops through the Fiordland National Park and Eglinton River Valley. Pictures could not do justice to many of the places we stopped including the magnificent beech forests and the precipitous Hollyford Valley. At one stop we even came across an infamous Kea bird that we had been warned about. This large member of the parrot family is known for its impressive intelligence but weird appetite for rubber and we actually witnessed this creature pecking away at the trim around the rubber seal of a van tail light. 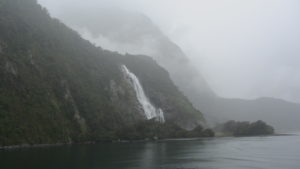 As we closed in on the western coast of NZ we passed through the 1.2 km historic Homer Tunnel that had been carved through the mountain with pick axe and shovel in the 1930’s. Once aboard the large catamaran vessel we experienced a delightful cruise down the Milford Sound to its entry into the Tasman Sea. It was difficult to gain true perspective of the scale of the towering cliff walls on each side of this channel, especially as we passed the Bowen and Stirling waterfalls which spewed from heights in excess of the world-renowned Niagara Falls. As we traversed up and down this amazing channel the captain skillfully maneuvered the boat within about 50 feet of some Southern Fur Seals that had gathered at Seal Rock and not far from there we caught a rare glimpse of a Hector Dolphin playfully swimming alongside and then disappeared into the depths of the icy waters. 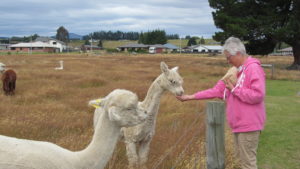 As we returned along the same route back to Queenstown, we were treated to some select musical performances of two world famous New Zealand recording artists and after a brief stretch and feeding Alpacas at the town of Te Anau (photo of Margie Robbins) the remaining portion of the drive went by quickly as we watched the movie, Whale Rider, an interesting and enjoyable glimpse into the lives of the Maori people challenged with retaining their culture. Two more great days in New Zealand and soon we will be off to Australia!