Many sights around Rotorua, NZ

Many sights around Rotorua, NZ

It was an early start to the day as we had many sights to take in around Rotorua, NZ. Our first stop was Rainbow Springs where Rainbow Trout are hatched and raised for seeding lakes and streams around Northern New Zealand. These beautiful fish are raised in crystal clear spring-fed ponds located throughout the park. In the adult pool, some fish were in excess of 15 lbs. and close to 3 feet long. 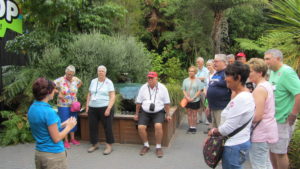 Group at the Kiwi House

Another interesting experience was the guided tour of the nocturnal Kiwi House where we learned about this flightless bird that is recovering from near extinction. It was fascinating to discover that this relatively small bird is hatched from an egg that is close to the size of an ostrich egg but a new born kiwi is almost left to its own devices as soon as it breaks free of the shell. A more humorous fact is that there are 3 distinct types of kiwis in New Zealand (NZ): this small bird that has become part of the country’s national emblem, the sweet green fruit many of us have enjoyed for years, and the human Kiwi which is essentially anyone who hails from this interesting country. 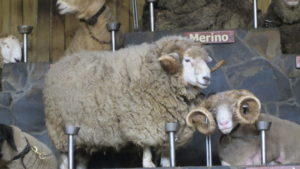 We then rushed down the road to the Agrodome Leisure Park to take in a show which featured 19 different breeds of NZ sheep paraded on stage, a shearing demonstration and an impressively skilled herding dog who could control large herds of sheep all on its own. Years ago there were more than 9 sheep for every human across the country of NZ but today there are only around 13 million sheep or just over 3 sheep per NZ resident. 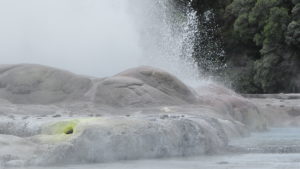 Not too far down the road we were treated to a private tour of Te Puia or Whakarewarewa Thermal Reserve which featured spewing geysers and bubbling mud pools which are linked to a vast sub-surface thermal area surrounding Rotorua. This thermal reserve is studied by many scientists and engineers who seek to learn more about this constantly evolving natural phenomenon and to find new ways to harness its power. 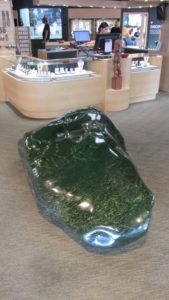 Following a quick lunch we visited a local jade facility where we were educated on the many colours and types of jade that are found around the globe where the tectonic plates were forced upward to form mountainous regions. We learned about these rare stones which are very hard and can only be shaped and polished by diamond tools to arrive at the rich shiny finish that each artistic jeweler seeks to produce. In the store a polished jade boulder caught everyone’s attention, especially when we learned it weighed in over 3 metric tonnes and was valued at over $3 million. (photo of Jade boulder) This stop would not be complete without the opportunity for some of the ladies to leave with a special item to remind them of their time in New Zealand.

Day 4 began with a leisurely start as we had a noon hour flight from Rotorua to Christchurch which is located on the south island. It was refreshing to not have to deal with the invasive security controls of a typical airport and following what seemed a very short two hour flight, we met Ethan, our new driver guide who would be with us for the next three days.

The drive from Christchurch to Mount Cook took a bit more than four hours but Ethan kept us entertained with interesting facts about New Zealand’s history, geography, economy, politics and more as he drove us through amazingly beautiful and rugged landscapes before arriving at The Hermitage Hotel near the base of Mount Cook. Considering the brief glimpses of the expansive mountain glaciers we saw at the end of our day, tomorrow will surely be another amazing experience!