On Friday we visited Trier, the oldest city in Germany. Trier became a meeting point for the Celtic, German and Latin cultures (15 BC) which evolved to form a western civilization. It was the first city north of the Alps.

We drove by the ruins of the Roman baths and amphitheater on our drive up to the lookout across the Moselle River valley and the city of Trier. Ken Mullet was fascinated as he watched a farmer work with equipment on his steep vineyard. I think he got some ideas to take back to his sons at his machine shop in Indiana. Ken said, “They have some very creative ideas that we can learn from.” 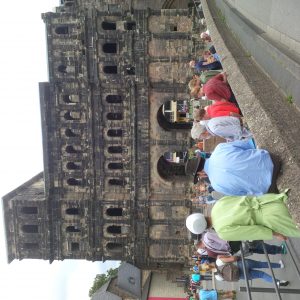 In the Basilica, today a Lutheran Church (formerly the imperial palace built by Constantine, 310 AD) we sang and enjoyed the echo of 3 or 4 seconds. We explored the market square – a great place to taste the local produce. A few persons also visited the Porta Nigra. This four-story structure was part of the northern wall and dates back to the 2nd century. 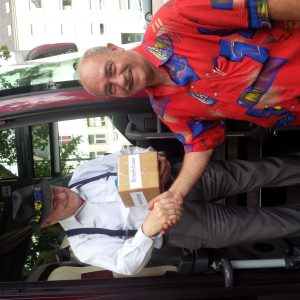 John and JP with the camera, John all smiles

Our group said goodbye to Markus who drove for us during the last 7 days and we welcomed back Jean-Paul or JP as he likes to be called. John Ruth was so pleased to see his camera that he left at Onijdes’ house in Friesland. Thanks to Onijdes for mailing it to JP and Stella’s home.

Departing from Trier, we soon entered the country of Luxembourg. We visited the US WWII military cemetery. This was especially meaningful for Clara Wagler. She talked to the curator in the office and found the details of the burial of  Mr. Yoder who died in 1945. She worked for his widow for a number of years in Indiana. 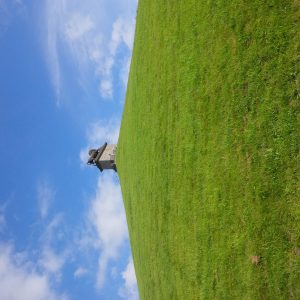 At Waterloo, Belgium we stopped at the Memorial of 1815 remembering where Napoleon was defeated and where he met his Waterloo. Four of the Amish young men decided to climbed the Lion Hill without using the steps! The Lion protects the Globe and symbolizes the return of peace to Europe.

John Ruth reminded us that Napoleon as a dictator took away many of the powers of the church. He was a lawgiver; many international laws go back to the Napoleonic Code. We recognize his influence in the separation of the church and state which we today take for granted. Only after this became law could Mennonites become citizens of Switzerland. 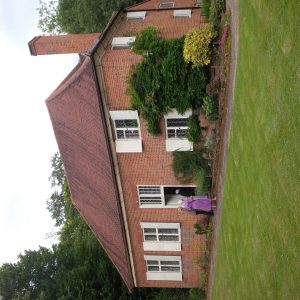 On Saturday we crossed the English Channel by ferry from Calais, France to Dover, England. It was sobering to see all the refugees behind the barbed wire in France as we neared the port. These thousands of refugees from Africa and Syria are trying to get to England. They know the British law states that after they reach British soil they will have freedom.

The highlight for Saturday was visiting Old Jordans Quaker Meetinghouse. This meetinghouse has been in use for worship on a regular basis since 1688. William Penn would have worshipped here when he was at home. Since the seat of government was in London, William had to come back from Pennsylvania to London when there were issues that required government action. William had a beautiful home built along the Delaware River. He had planned to settle his family in the new world. 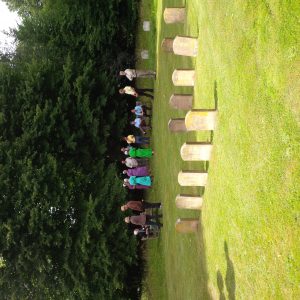 William Penn died and is buried in Old Jordans cemetery. We saw his tombstone along with the marker for his two wives and five of his children. 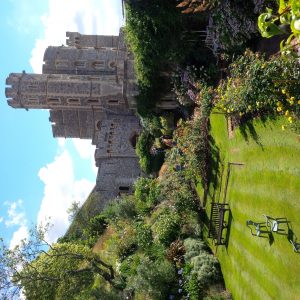 On Sunday morning we visited a Royal Residence at Windsor Castle. This is Queen Elizabeth’s favorite weekend home. It is the oldest and largest inhabited castle located in the county of Berkshire.  We were amazed that at 9:45 a.m. we had to wait in line for 45 minutes to enter. We were told that yesterday they had 9,000 visitors. Queen Elizabeth was not in residence this weekend as she was at her castle in Scotland. The Queen also takes her horses to Balmoral Castle in Scotland for their vacation.

Yesterday afternoon we were unable to take our double-decker bus tour of London since the city was closed for a cycle fundraiser. The group decided to divide. Those who wanted to walk around the city of London went with Loren on the train. Sam Stoltzfus was one as he wanted to see Big Ben. JP told him it is just a clock on a tower. We all understood it was important for Sam and others to see the famous landmarks of the city of London.

The other half of the group went with Wilmer and John to visit Stonehenge. This ancient temple was also crowded with tourists. The stones were raised 4,500 years ago by a sophisticated people. It was meaningful standing in the beautiful countryside reflecting on the thought and planning for how the prehistoric people constructed these stones. We remembered this was constructed more than 2,000 years before Abraham as a place of worship and was also used for burials.

Last evening John Ruth had his quiz. He said it was the first time he moved from 20 questions to 25 questions. However, with all the teachers in the group it is important. Loren and Stephen had to tell Sam to be quiet and to stop giving out the answers.

Caleb Miller and Loren Beachy were tied with more than 100% due to the 2 bonus questions. Jay, Jennifer and Fred also got prizes for being in the high 90%. It was a lot of fun and John Ruth said this group was listening and interested in learning.

The group said goodbye to each other. We gave our tip to JP, our driver and friend. Tomorrow those flying or staying longer in Europe will take the shuttle bus to Heathrow to continue their travels. JP and Wilmer will take those going by ship to Southampton to board the Queen Mary 2. May God go with us in our continued journeys.