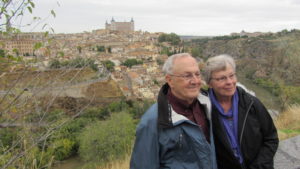 Jim and Elaine Gibbel across the river from Toledo, Spain. 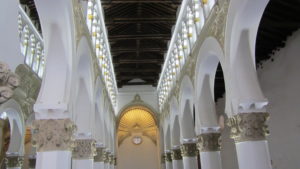 Beautifully restored synagogue which also served as a worship place for Christians at one time.

Our final two days in Spain included an excursion to Toledo, known as the city of three faiths, which included an informative guided tour through very narrow streets of this ancient city. It was fascinating to find signs and architecture intertwining Christian, Jewish and Muslim faiths and cultures with a clear attempt to preserve this unique historical collaboration well into the future.

We returned to Madrid for the evening to a dinner of tapas at a quaint little restaurant known to Victor, our host from AmaWaterways. It was a fun evening consuming small portions of meats and vegetables prepared and served by the owner and his family until we had exceeded our limit. The rain had stopped and so most of us enjoyed a leisurely walk down a pedestrian mall back to the hotel. 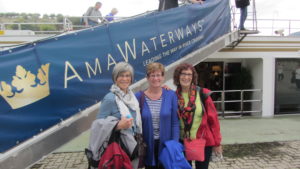 About to embark the AmaVida.

On Tuesday we had our bags packed first thing as we would soon arrive at our river boat but along the route toward the Spain/Portugal border we stopped to tour Salamanca, another well-preserved historic city, which was established as the centre for higher education in the 1200’s and continues to this day as a significant university town. Restoration work was evident throughout the main campus which included a countdown clock in a centre court which displayed the minutes, hours, days and years before the 800th anniversary of the establishment of the University of Salamanca.

Following the walking tour our guide took us to a local hotel for lunch where we were treated to a salad buffet and paella prepared over a massive open cooking pan. As we devoured this delicious meal we learned that this beautifully restored hotel was previously a monastery where the monks had prepared food for the faithful in their community.

Our final leg of the journey took us through the rolling mountain range in western Spain with endless farm fields surrounded by stone walls where sheep and cattle grazed. The bus driver skillfully maneuvered the final 10 plus kilometers  through multiple switch backs until we arrived at the pier where we met the AmaVida (our floating hotel for the next seven days) at the fork of the Agueda and Douro rivers. This unassuming port along the border of Spain and Portugal was located at the most northerly navigable point of the Douro River and where we embarked this luxury river vessel to begin the main part of our journey.