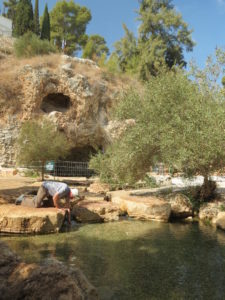 At Harod Spring in Jezreel Valley, where Gideon sorted his troops by having them drink or lap water, Pastor Ray Martin of Ontario decides which he will do.

On a hot Thursday morning in Galilee we crossed Jezreel Valley to visit an area where biblical battles happened–Gideon’s defeat of the Midianites, Saul’s and Jonathan’s deaths in a struggle with the Philistines, and the death of Jezebel and her son in a palace coup. These war stories reminded us of the multiple conflicts in the Near East region. We reflected on a prophecy of Isaiah that refers to Gideon’s battle with the Midianites, a prophecy that ultimately finds fulfillment in Jesus:

“For as in the day of Midian’s defeat,
you have shattered the yoke that burdens them . . .
Every warrior’s boot used in battle
and every garment rolled in blood
will be destined for burning . . .
For to us a child is born . . .
he will be called Wonderful Counselor,
Mighty God, Everlasting Father, Prince of Peace” (Isaiah 9:4-7)