We loaded the bus in Melbourne Wednesday morning and headed for the airport. There was some anxiety when we got stuck in a traffic jam on the highway but it didn’t hold us back too much in the end. The impressive efficiency of the group check in at Qantas Airlines ensured we got to our gate in plenty of time. Once in the air those by the windows explored the expansive red desert that extended as far as the eye could see in all directions and only interrupted by river beds resembling blackish veins. 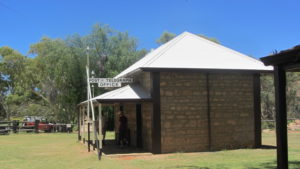 As we stepped off the plane in Alice Springs the heat was surprising but welcomed. As we drove to the hotel our driver informed us it was around 40 C or close to 110 F. Our driver/guide, John (a tall rugged man with a shaved head and a long beard who was actually a Kiwi) got us to our hotel and took us into town for some lunch. 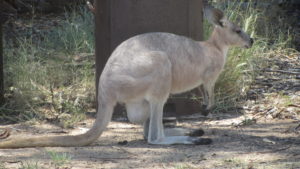 Close encounter with a kangaroo

The heat was not going to interfere with the schedule so we headed right to the Telegraph Station Historical Reserve which had been the reason the town of Alice Springs existed today. It was fascinating to learn of the sacrifice and commitment of the people who founded the original telegraph station in 1871 as a means to establish a communication connection between Australia with the rest of the world. We were even treated with a close encounter with a mother and baby kangaroo who decided to pass through the grounds.

Our next stop was the “School of the Air”, a unique correspondence school that had been established in the early 1950s. It’s an impressive system that enables children living in remote ranches, government facilities and Indigenous family camps to receive their education without having to leave their families. Initially the instruction was conducted through corresponded materials and instruction between a teacher and the student over CB radio. In 1995 the school underwent a significant technical advancement where every student was equipped with a satellite antenna and computer system complete with web cameras enabling students to interact through a live link between teachers and fellow students. Today the school has an enrollment of 140 students, some of which are 3rd generation students of the school. 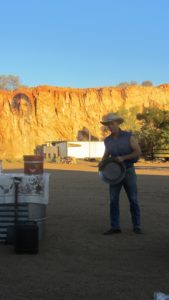 Danny at the outback BBQ

Later that night a small bus arrived at the hotel driven by a rugged middle aged man named Gavin (who reminded many of us of Crocodile Dundee) who would drive us to an Outback Bush BBQ. As we wound our way down a dirt road we sighted a few more kangaroo before arriving at an old quarry.

As we stepped off the bus we were greeted by Danny, the second generation owner of this unique establishment. Danny started our evening with a demonstration of “returning” boomerangs followed by some stories around a camp fire where he prepared bread that would be baked in a cast iron pot over the fire. As we continued, seated on 18” logs placed on edge as stools, Danny introduced us to a fairly sophisticated older gentleman named Don who would offer us a short lecture on the Indigenous people of Australia. After this very interesting and entertaining lesson we were invited to grab a plate and pick up our beef steak that Danny had grilled to our preference and on our way to the table fill the remainder of our plate at the buffet table. 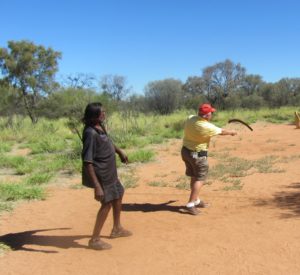 This special evening did not end with this delicious traditional BBQ meal. We gathered back around the camp fire and sang along with another old-timer strumming his guitar and introducing us to some traditional songs of Australia. The evening ended with an exhilarating surprise as Don asked us to follow him back out into the quarry and once positioned in a large circle the lights were shut down and we found ours blanketed by a canopy of stars. Don spent over 30 minutes using a laser pointer to introduce the many stars and galaxies most of us had never seen before due to the light pollution around our urban communities. A packed full day that we will never forget. 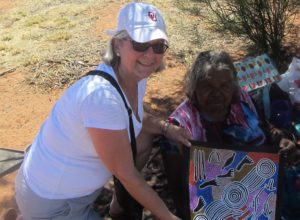 We were up early the next morning to beat the heat and take in an Aboriginal Dreamtime & Bush Tucker tour. Our guide provided even more information than what we learned from Don the night before about the Aboriginal peoples and survival in the extreme climate of central Australia. After some very tasty sweet bush bread baked over a fire we tried our hand at throwing a boomerang and learned a bit about bush tucker, the many edible wild items growing naturally throughout the desert. Andrew then presented us with a kangaroo tail that had just been cooked up by the Aboriginal ladies that morning. It was very tasty meat that resembled pork and clearly offered protein to their diet. Just before we left we had an opportunity to purchase some artwork from the actual Aboriginal artists and most were willing to have their picture taken. 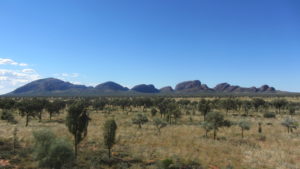 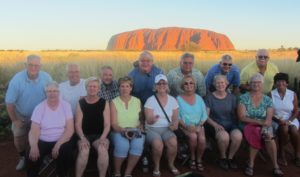 Then it was time to get to the airport for our short flight to Uluru (Ayers Rock). Upon arrival, our driver/guide Gary took us on a tour of the Ayers Rock Resort and then to the Sails in the Desert Hotel, a sprawling complex that also served as a convention hotel. After freshening up Gary returned to take us on a fascinating tour of Kata Tjuta (or the Olgas) which are a series of gigantic rock domes that are apparently over 500 million years old. It was soon time to make our way to the designated area to experience the sun setting on Uluru, the well-known Ayers Rock, while sipping on champagne and munching on a few snacks as this massive rock formation changed colours as the sun set behind us. What a peaceful way to end our day! 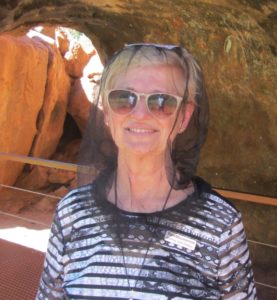 Fly nets came in handy in the National Park

Friday morning, Gary took us on another tour through the Uluru-Kata Tjuta National Park, including a number of hiking tours to some breathtakingly beautiful sacred sites and the Aboriginal Cultural Centre where we learned more about the struggles between the original “white” settlers and the Aboriginal people. It was encouraging to learn that the National Park is managed by a Board of Directors where the majority of directors are of Aboriginal descent, ensuring this sacred land is protected into the future.

In the afternoon we boarded a flight to Cairns, Queensland, on the north coast of Australia. As we walked across the tarmac in the blazing heat one of the airport ground crew reported that the surface temperature of the asphalt was 76C (169 F) and that we needed to get the plane moving before the surface becomes too soft to maneuver the heavy aircraft.

Upon arrival in Cairns our guide, Suzanne, took us to our hotel and along the way prepared us for our next day. Over a very nice buffet dinner in the hotel we reflected on our trip so far and the remaining days ahead.