The TourMagination Vietnam and Singapore tour members arrived safely in Hanoi on Wednesday, November 23. David Byler mentioned that we lost Tuesday, having left North America on Monday evening. We were all thankful for safe travel and healthy bodies that allow us to participate in this exciting pilgrimage tour. Sharing with each other, we recognize the many distinct desires that motivated each of us to join the tour.

We were met at the airport by our guide, Ms Quyen. On our way to our hotel she informed us that Hanoi, the capital of Vietnam, is the second largest city in Vietnam with 8 million residents. Vietnam has a total population of 92 million inhabitants. As we drove the 30 minutes we saw rice fields and water buffalo with farmers. Hanoi is also the city of motor bikes. Everything is transported by motor bike.

After having time to freshen up we were met outside our hotel by cyclo drivers eager to take us on a tour of the Old Quarter. The phrase “Share The Road” takes on a whole new meaning here. There was no shouting, just calm determination to get to your destination. This really is the city of the motor bike.

Following a delicious early dinner, we attended a cultural night, “Vietnam Melodies.” This show interpreted the culture and life of the Vietnamese people in the different regions. There are 54 distinct cultures across Vietnam. Unfortunately with our jet lag our bodies struggled to enjoy the show. Ms Quyen apologized that the show was offered the wrong night.

Yesterday Luke Martin our storyteller wished us Happy Thanksgiving. He, along with his wife Mary, served as the MCC country directors from 1962 to 1975. His stories bring a richness to our tour. 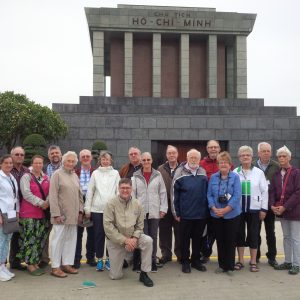 Our group at the Mausoleum

Ms Quyen informed us that Vietnam gained its independence from the French in September 1945 under the leadership of Ho Chi Minh. We had our group photo taken in front of his Mausoleum.

Ho Chi Minh studied in the US and in Europe. However, he could not gain the leadership’s attention on either continent, to listen to his call for the independence for the people of Vietnam. Luke said, if he had, history would be very different. It was after he read Lenin’s writings and Marxist ideology that he found his answer. 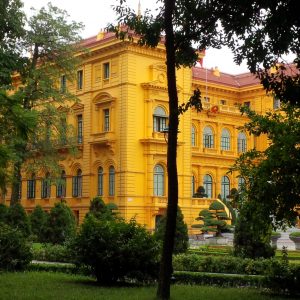 As we walked the beautiful grounds of the Presidential Palace we were informed that Ho Chi Minh refused to live in the Palace. He lived in the workers’ cabin until they built him the Stilt House on the grounds. He wanted to be closer to the people.

We visited the Confucius Temple which was filled with students who are graduating. They come here to have their photos taken. They believe the temple of Literature will bring them good luck for the future as the begin families and careers.

Ms Quyen informed us that Buddhism is the #1 religion in Vietnam. #2 is Confucianism and Taoism is #3, the religion of the common people. Christianity was brought to Vietnam in the 15th century. Christianity also brought writing and the alphabet to the people.

Yesterday afternoon we visited the Museum of Vietnam Culture. This museum is very well done, interpreting the life and cultures of the people. 75% of Vietnam is mountains and 25% is delta or agricultural. In contrast 80% of the people live in the non-mountainous regions. The hill and mountainous people are very poor. The Mennonites are working with many of these people. 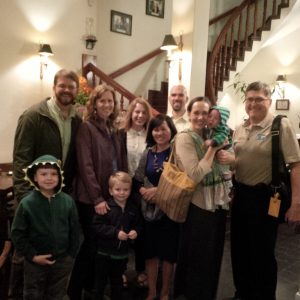 Wilmer with MCC staff and family 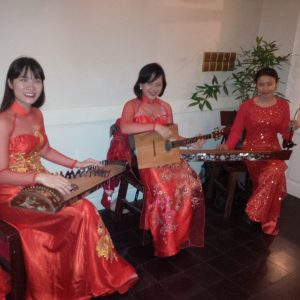 Last evening we invited the MCC staff and their families to join us for a Thanksgiving dinner. Conversation around the tables was very stimulating and encouraging. We learned that a lot of work done by our MCC Staff is focused on Agent Orange issues. This most deadly chemical is now affecting the 4th generation of Vietnamese people. It is very exciting to see the energy and enthusiasm our staff from US and Canada are bringing to their partnership with the people of Vietnam.

Today we look forward to our tour through the rich Red River Delta to the stunning Ha Long Bay. We will enjoy a cruise on the Bay. Tonight we were able to get tickets to the Hanoi Opera House to see a Concert & Ballet called “Colour of Love” which includes the Messiah. We are so excited that tickets were available.