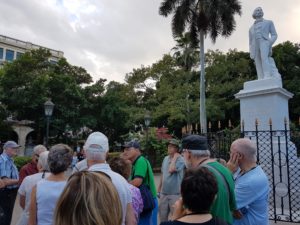 Our first two days in Cuba were full of so much learning. We landed in Varadero to sunny skies and to everyone’s delight we immediately saw some of the iconic classic cars of Cuba. On our way to Havana we stopped in Cojimar, a small fishing village where Ernest Hemingway enjoyed spending time and writing. We were all very ready for lunch and enjoyed some local seafood in a restaurant Hemingway was known to frequent in a quaint bay area. While we ate some of us watched as a woman fished wading in the water.

In Havana we arrived at Hotel Nacional. This hotel is a significant historical building in Cuba. Built in 1939, it was the place where famous figures gathered and socialized and it was also the base for Fidel Castro during the Cuban Missile Crisis.

To begin our second day Jack Suderman gave an orientation to Cuba. Jack shared stories of his many experiences with the people of Cuba including church leaders and politicians, a framework to guide us through what we were going to see over the next nine days. He told us that it was important that we were here visiting Cuba. Both he and Irene shared their feeling that partisan politics have divided us too long and our common humanity demands that we sit with each other, eat with each other and see the face of the other. We left the session feeling challenged and inspired. 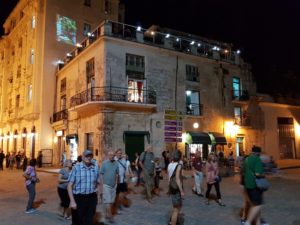 The rest of the day was spent in Havana with a city tour. We stood at the famous revolution plaza where again the old cars caught the eye of many of us and photo ops ensued. The local craft market was full of artisan wares and many took advantage of the shopping opportunity.

We had time to explore the old city of Havana walking through the bustling old streets with music on each stretch. Locals were out enjoying a Saturday evening. We ended our night with dinner in the old city. After two full days we were beginning to get a flavour for life in Cuba.