Saturday the group met at our hotel and then walked to the subway to take it to Spandau. We had a surprise when we got off as the doors closed prior to everyone getting off, so they had to travel to next stop! We walked to the new boat docking and left our luggage then walked into the town of Spandau to tour around. We visited some sites and then went to the Citadel built in the 1300’s. We climbed the lookout tower, and it was quite interesting. 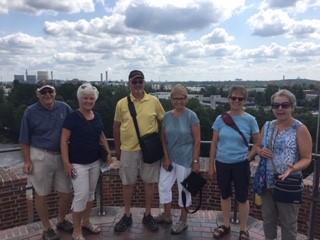 Part of group on lookout tower 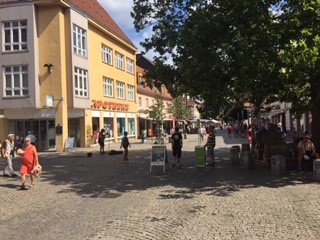 When 3:30 rolled around we boarded the boat and did the customary introductions then started up river, a beautiful late afternoon/early evening cruise to Oranienburg. Dinner was excellent, I think everyone was pleased. We then toured around the town a little bit. The sidewalks were pretty much rolled up. There was a concentration camp here in WW2, which the group was quite interested in, some may visit at end of tour. 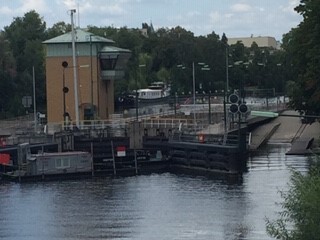 Sunday began with a good buffet breakfast and we were provided with a bag lunch and lots of water. We travelled a piece and got off the boat at about 10:00 after some bike orientation. 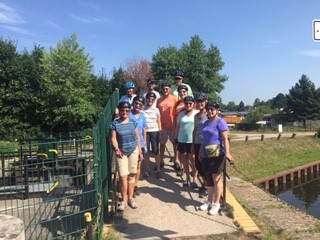 The group on a bridge

We were headed towards Eberswalde on the Havel Canal. We rode along the canal at a nice pace, and stopped at a cafe in a small village where there was a lock and lots of activity.

Then we travelled to Finower and the group climbed the water tower called Wasserturn, built in 1917 to support the bronze factory which is closed down now. 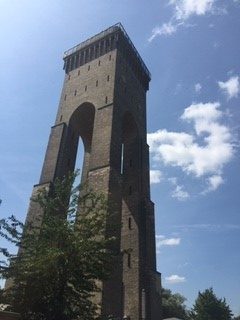 We biked another while then stopped at another lock at an outdoor biergarten where we enjoyed our bag lunch and some ice cream. We then carried on across the country side; we had the option to carry on or go to the boat. 4 left with guide and me, and we dropped them at boat, then returned to the remainder of the group and carried on to the lift that separates the Havel canal from the Oder River, a massive lift that we will go down on Monday morning early. 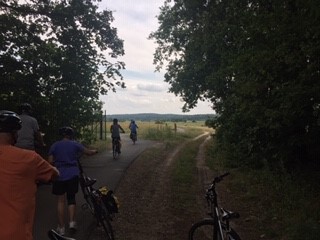 We started Monday by going through an engineering marvel, a lift lock developed in 1930 or something like that. It was cool! This put us on the Odor River. 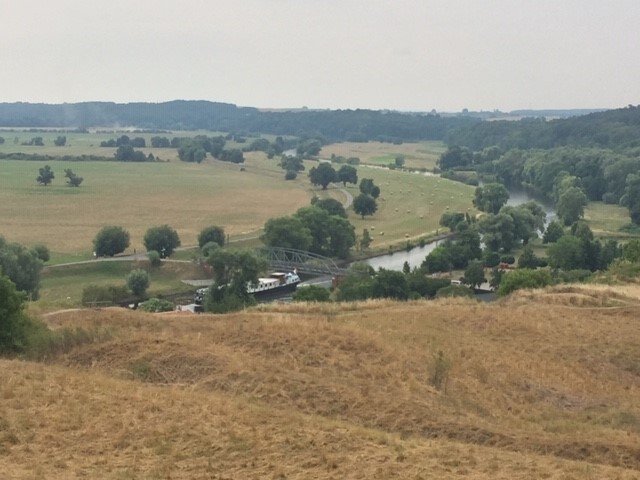 We then sailed up river for an hour or so and got to our bike starting point. A boat was parked at the dock and refused to move, rather humorous, our Captain handled it well and because our boat is constructed with a shallow bottom we just pulled back and docked on shore. We got off and started biking along the canal. The river separates Poland from Germany with a valley between. We saw lots of different birds and some deer. 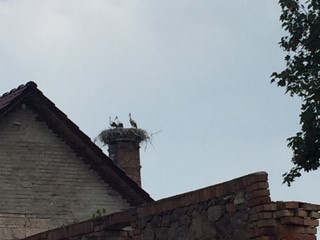 Storks but no babies?

We stopped in Stolpe and visited a water tower built in the 1200’s, very interesting, it was targeted for destruction in 1535 or so and was out of commission, then in WW2 it was hit with a shell but only slightly damaged. Very cool.

After that we had lunch at a cafe along river, it was very hot today but everyone coped really well.

We then took off for Schwedt, biking through the National Park. We stopped at an exhibit of the park to cool off then continued to our boat. We met some riders on another tour doing what we are but on a bigger scale. Another fun day from my perspective. 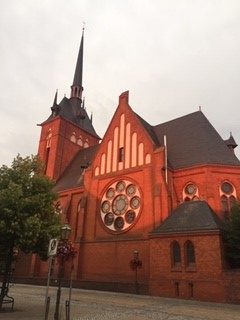