First day in the Canadian Rockies

First day in the Canadian Rockies 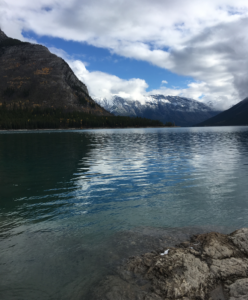 The adventure has begun and what a day it was.  After a restful night at the Calgary Tower International Hotel in downtown Calgary, we headed west on the Trans Canadian Highway for Banff.  What a contrast, as we left the bustling city of 1.2 million and soon could see the snow covered peaks of the Rockies.

After entering the Banff National Park, our first visit was Lake Minnewanka with its pristine waters and spectacular scenery.  Other beautiful scenes caught our attention as we continued through the Park into downtown Banff where we had lunch. This was followed with a ride to the top of Sulphur Mountain on the Banff gondola.  The 8 minute ride took us above the snow line for 360 degree views of the Banff townsite and the surrounding mountains.  We then went by Bow Falls and the Hoodoos as we headed to our lodging for the night at the Banff Caribou Lodge.  Our wildlife sightings of the day included white-tailed deer and a herd of elk.

After enjoying a day of spectacular scenery we are again reminded of our Great and Loving Creator. 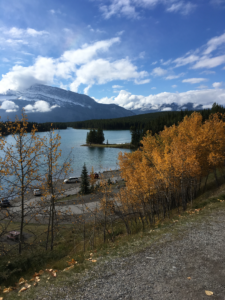