Home Tour Journals Final days in and around Lisbon, Portugal

Final days in and around Lisbon, Portugal

Final days in and around Lisbon, Portugal 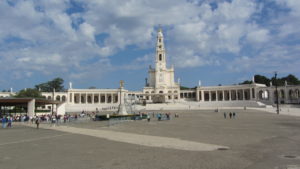 The last five days of this amazing trip to Spain and Portugal start at the eastern mouth of the Douro River, in the city of Porto. Most well-known for the storage and aging of Port wine, Porto offered plenty of amazing historical sites. We also took a tour about 45 minutes away to the town of Guimarães, one of the many UNESCO World Heritage sites in Portugal. Sunday also included the formal Captain’s Gala dinner which is always a highlight while cruising and the menu options were extra special.

Monday would be our last day on the AmaVida (our cruise ship/floating hotel) which included a variety of different tour and free time options in and around Porto. Many in the group suggested they hope to one day return to spend more time in this quaint but thriving port city.

Tuesday morning we said our goodbyes to the friendly and caring crew on the AmaVida and loaded the buses destined cross country for Lisbon but the three hour drive was broken up with an interesting stop at Fatima, a world renown Catholic pilgrimage site, famous for the religious vision of the “Virgin of the Rosary” that three local children claimed to have seen in 1917.

Preparations were well advanced for the 100th anniversary which is expected to involve more than a million Christian pilgrims from around the world who anticipate an address from the Pope during this special event. The expanse of the site and the two cathedrals (one modern and the other historic) were architecturally impressive along with the glistening white limestone and marble which was almost blinding in the bright sunshine. 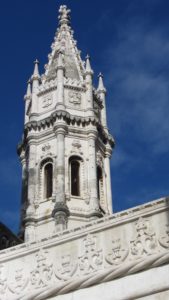 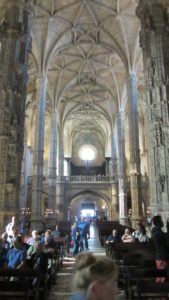 Later in the afternoon we arrived at the beautiful Intercontinental Hotel, Lisbon where we settled into our rooms before enjoyed an evening dinner at a unique seafood restaurant in “O Farol” with the 60+ travelers from AmaWaterways. It was fun taking the public ferry across the Tajo River which landed directly across from the doors to the restaurant.

Wednesday was the day for a panoramic tour of Old Town Lisbon. The first stop took us to the 16th century Jerónimos Monastery where we attempted to capture the beauty and complex architecture of the Baroque style church and connected buildings with our cameras. We were entertained by the stories our guide offered about the carvings and statues that were influenced by the tales from sailors who returned from far off lands including countries now known as Africa and India. We were astonished to learn that this massive collection of buildings withstood the impact of the 9.0 magnitude earthquake and subsequent tsunami in 1755 while the majority of Lisbon was completely wiped out. Structural engineers and architects from around the world have since studied the intricate design of the walls, columns and roof structures of this monastery to design and construct more resilient buildings today. 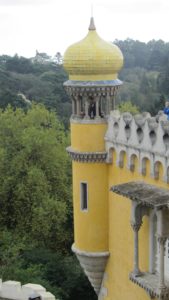 The last full day of our tour took us to the Pena Palace near the small city of Sintra. This was considered a modern palace (relative to most palaces in Portugal which had been constructed centuries earlier) as it had been constructed in the mid-1800s out of the ruins of a 16th century monastery. It was an interesting drive up the mountain with multiple sharp switch back turns which seemed simple for our bus driver. Once at the gate we had another distance to travel so some challenged the climb by foot while others waited for the shuttle bus. 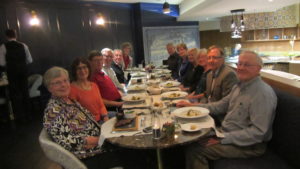 Despite the crowds we ventured into the palace to witness the innovative design and preserved furniture (of that time) which included functional bathrooms and even a telephone (even though no one else had a phone to communicate with). Then it was time to investigate the gift shop and spend a few more Euros before venturing back down to the buses. Then our final wine tasting in Sintra and a light lunch before heading back to Lisbon to pack our bags.

We ended the day with a very nice farewell dinner in the hotel restaurant and then it was time to catch a few hours of sleep before our departure to the airport at 2:30 a.m. to eventually arrive to our respective homes Friday evening.

Two glorious weeks travelling throughout Spain and Portugal capturing great memories and the blessings that come from new friendships.